Symbolism in Art by Corinne Kennedy

For example, the lily, a white showy flower, has been used for centuries to represent chastity, virginity, innocence, and purity.  The meaning can vary a bit from one culture to the next.  The word lily comes from Lilium, Latin, which comes from Greek leirion, meaning "true," as exemplified by the Madonna Lily. 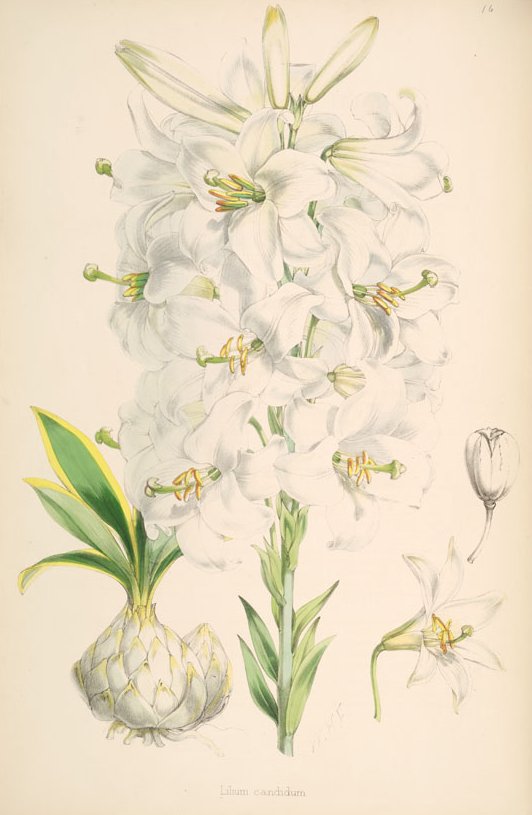 This representation applies to many lilies, not just the white ones; but, Lilium Candidum most traditionally carries the symbolism of purity as the true lily.  While cultivated worldwide for over 3000 years, Lilium Candidum is a native lily to the Middle East and Balkan Peninsula. Of course Biblical association with the lily goes back to Song of Solomon, or Song of Songs, the Hebrew being  Shoshannah, meaning “lily” or “rose,” and described by Biblical scholars as a white blossom with six petals and six stamens.  It has been said these lilies decorated the columns of King Solomon's temple. With the establishment of the catholic church, the Lilium Candidum became the recognizable symbol for the Virgin Mary, or Madonna, fitting for the Madonna Lily - pure, white,and true to her God. 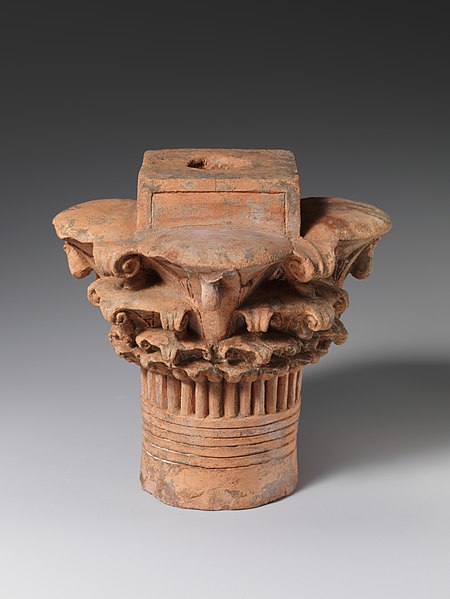 The Greeks and Romans (circa 1200 BCE – 500 AD) used Lilium Candidum to symbolize the Goddesses Hera and Juno, referring to the flower as the “Milk of the Lily” or “Milk of the Gods,” which they thought gave immortality.  The myth tells the story of how Heracles secretly fed Hermes from a sleeping Hera’s breast. The force of Hermes feeding woke Hera, causing the goddess to thrust him from her.  Yet, her milk continued to flow, creating the Milky Way in the heavens; falling droplets created white lilies here on Earth (Fig. 3). 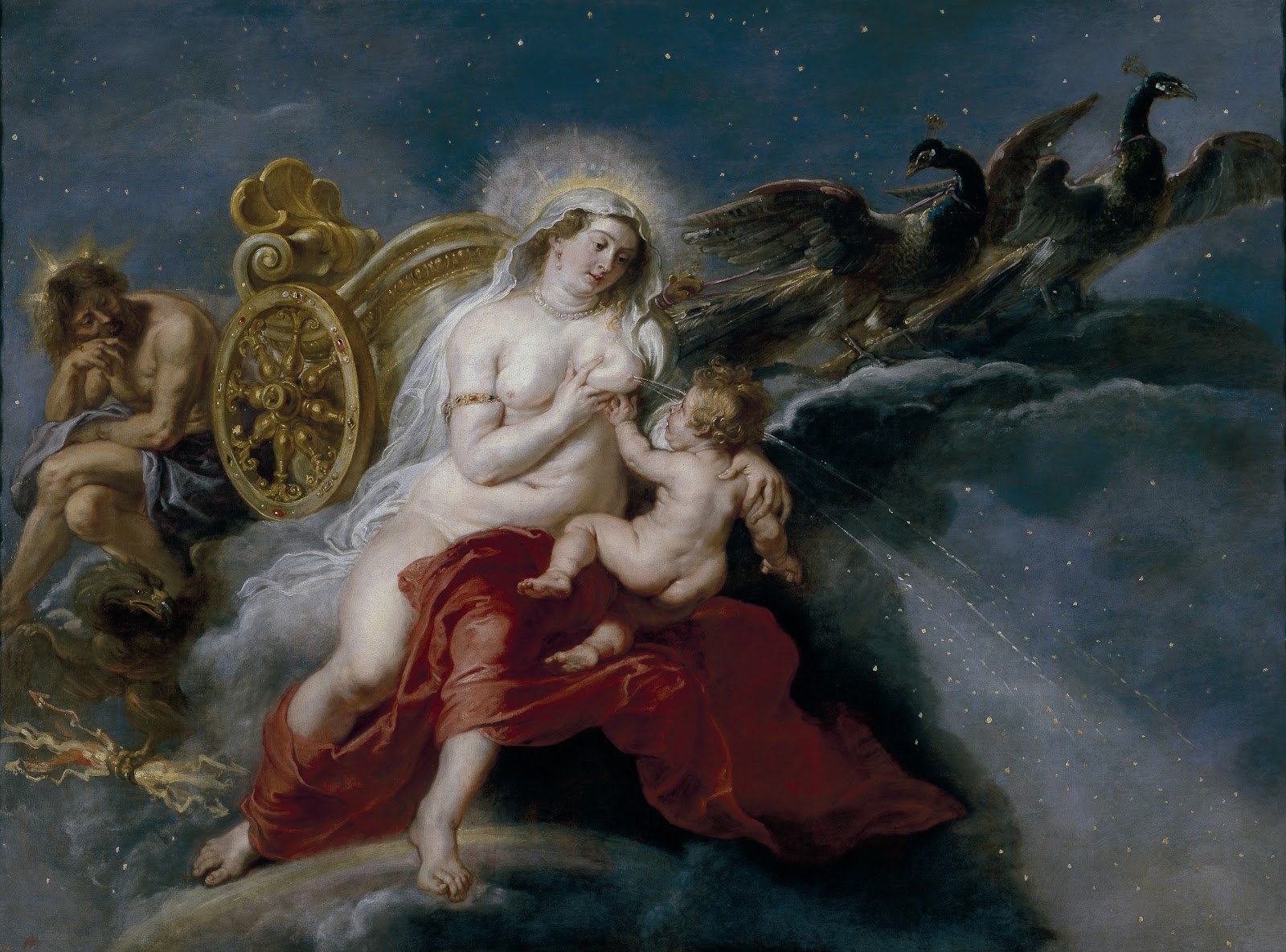 Although the Greek and Roman goddesses Juno or Hera have lost popularity and reverence today, the Catholic reappropriation of the lily to represent the Virgin Mary -- her purity & virginal state, as well as the immaculate conception.   Artists often depict Mary with a single lily (Fig. 4 & 5) some illustrate the angel Gabriel presenting the lily to Mary or place the lily in vase near her. 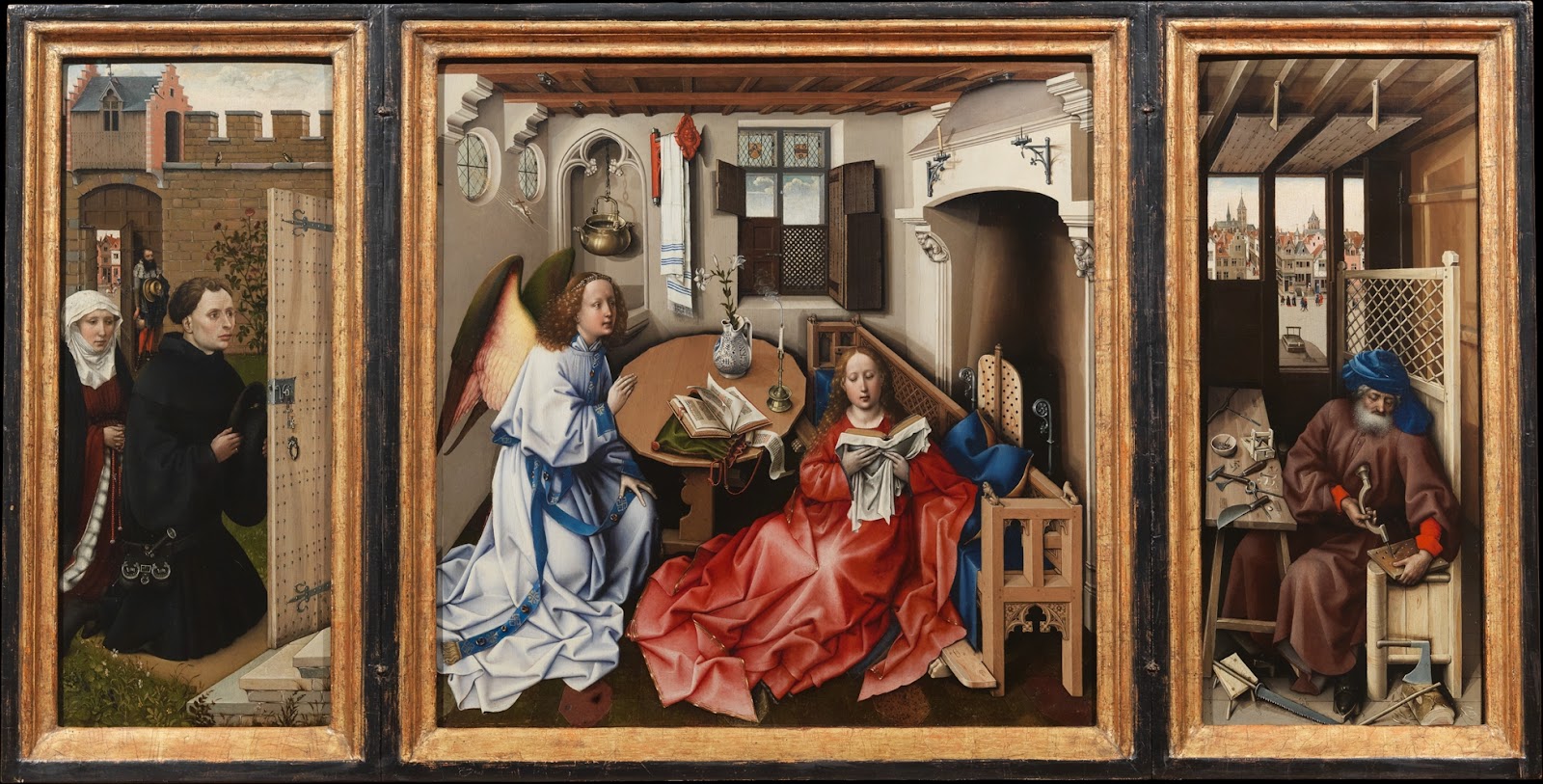 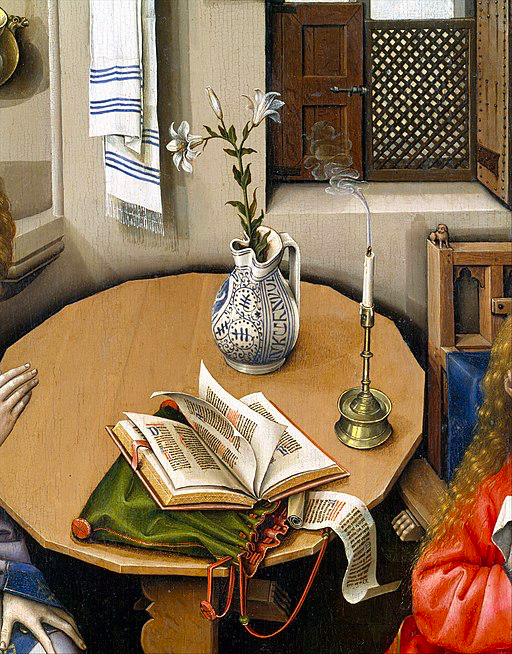 Fig. 5.  Lily on table in The Annunciation Triptych (Merode Altarpiece)

For instance, the American Romantic poet, Emily Dickinson (1830-1886), well-known for using flowers as a metaphor in her poems, as well as her preference to dress in white.  Growing up as a Calvinist, Dickinson became familiar with pictures of nuns dressed in white, most likely from art books her family collected. 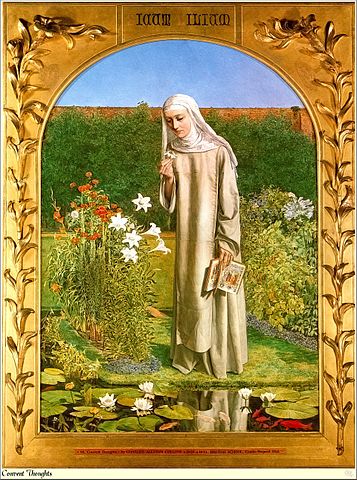 Dickinson typically dressed in white, “the patroness of a single and aesthetic life.”  Some scholars have been known to call her the “Nun of Amherst.”  Indeed, Dickinson never married, essentially becoming the pure virgin like unto the biblical Madonna.  In addition, Dickinson’s lifetime in America coincided with the Victorian period in England and making the poet familiar with the works of the Pre-Raphaelites, who expressed a penchant for using Christian symbols in their art.

Besides dressing in white, Dickinson avidly cultivated a garden that included Madonna lilies. Apparently, she habitually greeted her benefactor, T.W. Higginson, with two lilies in hand, and could be seen with cuttings from her cultivated lilies frequently.  These images provided the partial basis for Dickinson’s signature characterization of white and association with the Lilium Candidum.

Through the Dark Sod—as Education—

The Lily passes sure—

Like Dickinson’s poem including lilies, this poem expresses the “education” of the lily as it pushes through soil, bravely, to sprout, grow, and bloom, representative of Easter and resurrection.  The lily, identified in the female, happily forgets the grave and joyfully swings through the meadow and the dell with grave forgotten -- an illusion to the immaculate conception and Christ’s resurrection.  The poem can generally be viewed as a celebration of spring, of the Virgin Mary, or of surviving trial and tribulation.

Keep in mind, symbolism uses objects other than flowers; geometric shapes, numbers, or colors have taken on traditional meanings that artists and authors use them to aid the viewer/ reader in recognizing important aspects of the image/ story.  Symbols act as a bridge by revealing subtle parts of a story, so one may understand the entirety of the image and its message.

Hyam, Roger and Richard Pankhurst. Plants and Their Names: A Concise Dictionary. Oxford UP, 1995, p. 186.