Symposium on Lincoln: The Movie and the Man 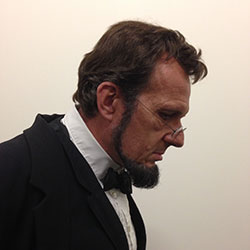 For fifteen years, sixth-generation Illinoisian George Buss and his good friend, the late Rich Sokup, interpreted Abraham Lincoln and Stephen Douglas nearly 400 times for local, state and national audiences. They appeared in the live broadcasts of the 1994 C-SPAN Lincoln Douglas Debates and were joint recipients of national honors from the Association of Lincoln Presenters and the Freeport Area Chamber of Commerce. George continues interpreting Lincoln using Sokup's script as a basis for his presentations.  In July 2007, he teamed with long-time colleague Tim Connors, who interprets Stephen Douglas, for the Illinois Sesquicentennial Debate Celebration: The Lincoln Douglas 2008 Reunion Tour. Buss was featured in the September 2008 issue of Smithsonian Magazine and on the Illinois Channel and several C-SPAN programs in his own right. Buss is also president of the Stephen Douglas Association, vice president of the Lincoln Douglas Society, board member of the Lincoln Fellowship of Wisconsin and the Lincoln Forum Board of Advisors. He has presented academic papers across the country and is guest curator of the exhibit "Out from the Shadow of Lincoln: The Portraits of Stephen A. Douglas" from his own collection of Douglas images and primary source documents. 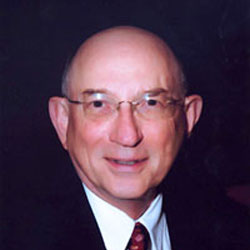 A graduate of Buffalo's Canisius College and the University of Notre Dame, John F. Marszalek has been Executive Director and Managing Editor of the Ulysses S. Grant Association since the collection moved to Mississippi State University in December 2008. He taught for five years at Gannon University in Erie, PA before coming to Mississippi State University in 1973, where he became a W. L. Giles Distinguished Professor of History in 1994, retiring as Giles Distinguished Professor Emeritus in 2002. Marszalek is a specialist in the U. S. Civil War, the Jacksonian Period, and race relations and has written or edited 13 books and over 300 articles and book reviews. He has lectured widely throughout the nation and has appeared on ABC, CBS, CNN, and NBC Television, the Arts and Entertainment Television Network, C-SPAN, C-SPAN 2, Showtime Television, the History Channel, the Voice of America, Mississippi Public Radio, and radio stations throughout the nation. His publications have been the subject of major news stories in national newspapers including the New York Times, Wall Street Journal, Washington Post, and USA Today. In addition to his current position directing the Ulysses S. Grant Association and Presidential Library, he is co-executive director of the Historians of the Civil War Western Theater and a member of the Board of Advisors of the Lincoln Forum, the Lincoln Prize, and the Lincoln Bicentennial Commission. 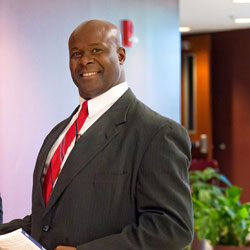 Stephen Middleton is a professional historian, specializing in the constitutional and legal development of the United States. He holds a B.A. in history from Morris College in Sumter, where he graduated cum laude, a masters degree from The Ohio State University, and a doctorate from Miami University (Ohio). He was also a Samuel I. Golieb Fellow in Legal History at New York University School of Law, where he simultaneously completed the first year curriculum in law. Middleton has taught at Wilberforce University (Ohio), The University of Cincinnati, and North Carolina State University, where he was a tenured professor in the Department of History. Currently, he is the director of African American Studies and Professor of History at Mississippi State University. Middleton has written and edited a number of books, articles, and reviews, which have appeared in a number of professional journals, including The Journal of Southern History, The Historian, and The Journal of the Early Republic. He has lectured widely in the United States and abroad. His current research includes Judge Robert Heberton Terrell, the first African American to be appointed to a judicial office by a U.S. president. Middleton is also doing work on the legal construction of whiteness, where he examines how state courts confirmed or rejected a "white" identity of mixed-race people. 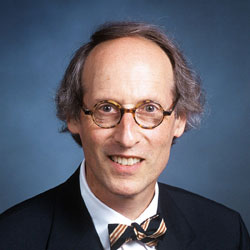 John David Smith is the Charles H. Stone Distinguished Professor of American History at The University of North Carolina at Charlotte, where he teaches courses on the American South, the Civil War, and African American slavery and emancipation. From 1982 to 2004, Smith taught at North Carolina State University, where in 1992 he was named Alumni Distinguished Professor of History. In 1998-1999, he served as the Fulbright Senior Professor of American Studies at the Amerika-Institut, Ludwig-Maximilians-Universität, München and, throughout his career, has lectured in eleven foreign countries. Currently, he serves as contributing editor for the Journal of American History, on the editorial boards of several scholarly journals, and on the Council of the Society for Historians of the Gilded Age and Progressive Era. He also edits nine monograph series for commercial and university presses. Smith has authored, co-authored, edited, or co-edited twenty-eight books and has published more than 150 scholarly articles in such journals as American Archivist, Amerikastudien, Civil War History, Journal of Folklore Research, Journal of African American History, Medical History, Münchner Beiträge zur Völkerkunde, Phylon, South Atlantic Quarterly, and in many encyclopedias and historical dictionaries. He has appeared on The History Channel as an authority on the U.S. Colored Troops and on National Public Radio and Voice of America on conservative racial thought during the Age of Jim Crow. 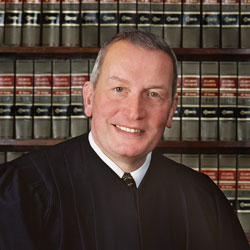 Frank J. Williams is the retired Chief Justice of the Supreme Court of Rhode Island. A graduate of Boston University Law School, and a long time jurist in the Rhode Island court system, he is also a veteran of the United States Army, having served three years in Germany and one year in Vietnam. Williams is one of the country's most renowned experts on Abraham Lincoln, having authored or edited over fourteen books, including The Emancipation Proclamation: Three Views, with Edna Greene Medford and Harold Holzer, and Lincoln Lessons: Reflections on America's Greatest Leaders, with William D. Pederson, which includes a chapter by John F. Marszalek, Grant Association Executive Director. He has contributed chapters to several publications and has lectured on the subject throughout the country. At the same time, he has amassed an unsurpassed private library and archive that ranks among the nation's largest and finest Lincoln collections. Since 1996, Chief Justice Williams has served as founding Chairman of The Lincoln Forum, a national assembly of Lincoln and Civil War devotees. For 9 years, he served as president of the Abraham Lincoln Association and, for 14 years, as president of The Lincoln Group of Boston. Justice Williams is a member of the United States Lincoln Bicentennial Commission and chair of the Rhode Island Abraham Lincoln Bicentennial Commission. He is also the long-standing president of the Ulysses S. Grant Association.